Back to Learning Center homepage

1. What is Movement Load

Movement Load from Firstbeat uses the accelerometer within our Firstbeat Sports Sensor to quantify the movement of your athletes.

Movement Load accumulates over the course of a session, capturing the movement of the athlete in any direction and providing you with a value for external work that has been completed within the session.

This section will explain what this means in the context of Firstbeat Sports and how you can use it as a Premium or Premium+ user.

2. Movement Load and the training process

To this point, the Firstbeat Sports ecosystem has focused on Internal Training Load and this will always be the primary focus of our analysis. 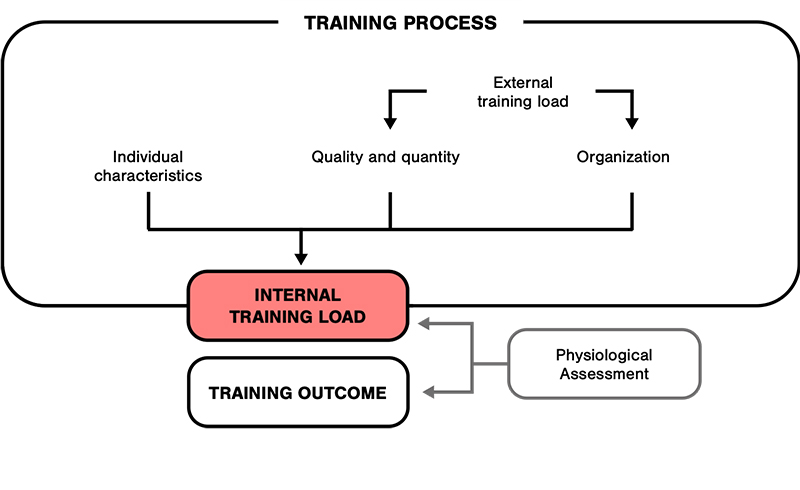 Internal Training Load is what drives the Training Outcome, i.e. how an athlete responds to a training session determines whether they get fitter or fatigued. Ultimately, this is the most important part of the process and what determines whether or not training has been successful.

External Training Load, called Movement Load in our platform, is the work completed within a session. It is this that elicits the Internal Training Load; therefore manipulation of external load alters the internal response and, thus, the training outcomes.

Definitions of these terms are below for a quick reminder:

3. Why is this important?

As mentioned above, it is the Internal Load that drives training outcomes. For instance, if your body is suitably stressed some sort of adaptation will occur to allow it to better cope with that stress in future.

Once we have established the internal load it can be useful to look at the External Load as your next step of the Training Process to better understand what causes a given internal response. We can then begin to understand how different quantities and intensities of External Load (shown as the Movement Load and Movement Intensity variables, respectively) influence the Internal Load, i.e. the dose-response relationship.

To date, we have been able to see whether an athlete has an increased/decreased Internal Load for a training session – be that relative to peers or their own previous performance in similar sessions. What we have not been able to do is objectively answer why. Was it due to changes in work completed or due to changes in physical conditioning? This is where Movement Load comes in. With Movement Load we can see whether that external work has changed relative to the internal work and assess where the differences have come from.

The added context provided by Movement Load opens more possibilities for what you can assess using your training load data. This section includes practical examples to help you better envisage how you could use this data.

Differentiating Between Conditioning or a Tactical Issue

In a soccer match, a player may have a higher TRIMP in the second half compared to the first. The first conclusion you might reach is that they have fatigued over the course of the game. However, it may be that they moved more in the second half – perhaps as a result of the team trailing and having to chase the game.

With Movement Load, we now get an insight into whether our player was tired and became less efficient, or whether they simply moved more. This can then be used to inform future training and address, e.g., is conditioning late in games an issue, or is it a technical/tactical issue that is causing a player to have to complete more work?

Fitness and performance testing are a regular part of elite sport, but it can be difficult to find opportunities to do it. This is especially true in team sports that have long competitive seasons with matches often every 2-3 days. Coaches can also be reluctant to give up regular training time to carry out testing. It is, therefore, important to find other ways to assess the conditioning of athletes when it is not possible to schedule a specific time for formal testing protocols.

One way to test without testing is to examine the relationship between internal and external training loads, i.e. TRIMP and Movement Load.

You can do this by creating a ratio between the two (Movement Load/TRIMP) which will be referred to as ‘Movement Efficiency’ for the purposes of this article.

The basic principle behind this is that those who move more (Movement Load) for less cost (TRIMP) are more efficient, and therefore have greater cardiovascular conditioning. This is backed up by research showing External:Internal ratio’s correlate with fitness (Akubat, Barrett, & Abt, 2014; Taylor, et al., 2020), while evidence also supports the use of such ratios in order to monitor fatigue (Derbidge, Moody, & Byrne, 2020) – an ideal complement to the Firstbeat Quick Recovery Test.

The below graph is a great example of this. It plots athletes’ YoYo test scores on the X-axis against their average Movement Efficiency for the subsequent two months on the Y-axis. As can be seen, individuals who scored better on the YoYo test generally had a higher Movement Efficiency.

This data can be used both as a cross-sectional comparison between individuals, but also to track changes in individual athletes’ condition over time. This allows practitioners the opportunity to continually assess changes in fitness without having to dedicate time to performing specific testing protocols. This could be especially important during rehabilitation and return-to-play where it may not be possible for an athlete to safely complete a more formal fitness test. Instead, the coach would be able to monitor the progression through the Movement Efficiency ratio.

As discussed in the ‘Using Training Effect: Periodization’ of the ‘Interpreting Training Data’ section of this Learning Center, you may be using Training Effect to loosely plan your training week structures and provide daily targets for the intensity of each session. By using Movement Load data you can begin to build a catalog of the different drills you use and get even more specific with your planning.

Different activities/drills will likely have different effects on internal load. The quicker you run (up to a point) the more efficient you become from an energy usage perspective (Cavagna, 1977; McArdle, 2000). Sessions with big areas that allow high-speed running will accumulate Movement Load at different rates to tight area work, whereas tight areas with lots of small movements will be very demanding internally relative to the movement.

With this data, you can select drills based not only upon their Training Effect and TRIMP but the impact they have on the body. Perhaps you choose a set of drills with higher Movement Loads to place more stress upon the musculoskeletal system, while the next day you may choose something with a similar TRIMP value but less Movement Load to place the emphasis more on the cardiovascular system.

See the below graph for an example. Each dot represents a different drill from your drill library. The x-axis shows the Movement Intensity compared to the average for all of your drills, the y-axis the TRIMP/min.

You would likely add labels for each drill name to aid the selection process, and, from this, you can choose what to do on a given day based on what you want to achieve. For a drill that elicits greater Movement Load relative to TRIMP, you would choose from the bottom right corner of the graph. The top left would give you a drill that has less movement but more cardiovascular demands. 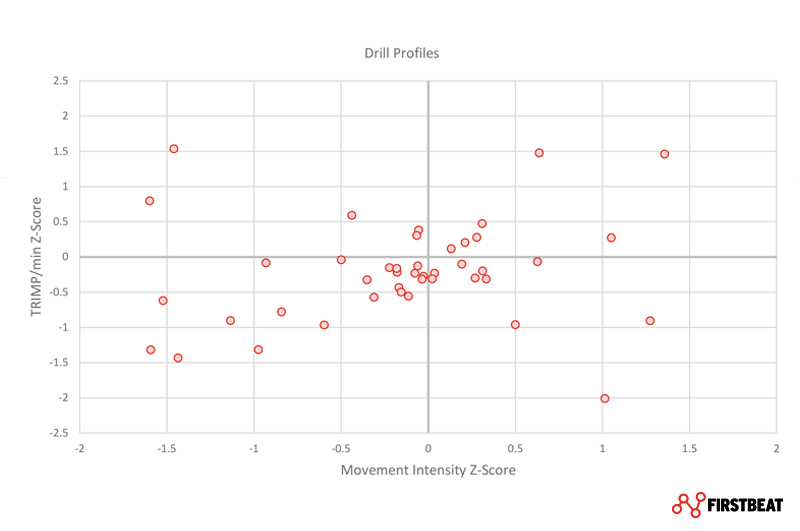 With this information you can build profiles of the different drills, getting an idea of what they offer in terms of both TRIMP and Movement Load and using the information to select appropriate drills for the desired physical outcomes.